Uploaded: Jun 2, 2015
Here's a first: A Michelin-starred chef from Paris is coming to Menlo Park this month to work a two-year stint at downtown French restaurant Bistro Vida.

Marine Thomas of La Rollange, a French tapas bar in Montmartre (sister restaurant to a well-known restaurant named La Table d'Eugène), will touch down in the United States June 5. 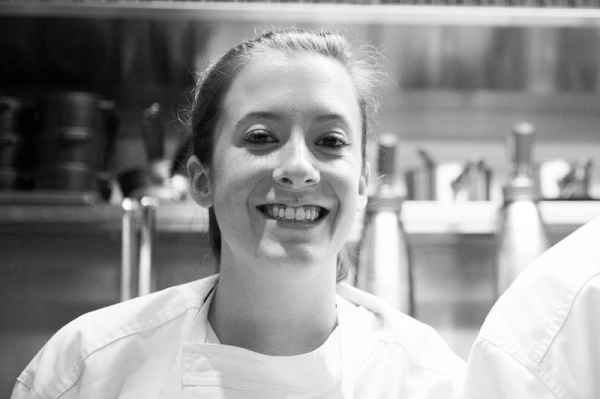 Almost two years ago, on a friend's recommendation, Bistro Vida owner Ali Elsafy went to La Rollange and "left blown away," he said.

"I went almost every night to eat," he recently recalled.

Elsafy has since returned many times and became friends with Thomas, who for many years had wanted to work in the United States, she said. She was initially looking for a job in New York, but then met Elsafy and the stars aligned.

More than eight months ago, as Elsafy started plotting changes for the Santa Cruz Avenue restaurant, they started a laborious visa process to get Thomas here. Outside of menu tweaks, the most significant change for the restaurant in ever-sleepy downtown Menlo Park might be a plan to keep Bistro Vida open until 11 p.m., serving wine pairings and simple late-night food.

Thomas started working at La Table d'Eugène in 2009 with chef Geoffroy Maillard. After two years, Maillard opened La Rollange and asked her to be the chef there.

Thomas said her philosophy in the kitchen is to always cook with love "because if you cook with love, we always get good food," she wrote in an email. She "does not have a special way of cooking" but instead develops dishes based on seasonal produce. She'll fit right in in the Bay Area. She plans to offer a menu "suited to the region" that highlights California products, she said.

"She's going to be something really good for Menlo Park," Elsafy said.


So excited for Ali, Marine, and Bistro Vida! This union is just what Menlo Park needs! Congratulations to Ali for bringing such an amazing chef to us. Looking forward to meeting her and seeing what she brings to our 'table'
Bisou Bisou!!!


I love good food, I would be interested in seeing a sample menu or information on a meals there once she get set up.

Sound like a huge opportunity for good food and fun.


OK - comparing this restaurant, Flea Street, and Alexander by the Sea - upcoming 25th Anniversary, which should we splurge on? We are not rich (Manresa is a pipe dream), but will splurge for something special once in awhile. Most recent, Passionfish in Pacific Grove. (Willing to spend a little more than that but not much more.) The only one of the above we have eaten at is Flea Street. Worth waiting for above chef? What per person $$ for each?


I know of a bakery in the Willows renowned for its brownies and its Kesey 2-star rated chef.


Looking forward to trying the new menu. Ali is a longtime friend who LOVES LOVES food, and Marie will bring the very best of my FAVORITE food town to our hometown.

can't wait for my first meal, and a late dinner would be perfect!

Report Objectionable Content
+   4 people like this
Posted by Carla, a resident of Downtown North,
on Jun 3, 2015 at 12:30 pm
Carla is a registered user.


This is really exciting news! Can't wait to try the new menu. Congratulations to Ali for making this happen. Love it that the restaurant will be open until 11PM....wow, certainly something different for sleepy Menlo Park!

Report Objectionable Content
+   4 people like this
Posted by Mike Keenly, a resident of Menlo Park: Allied Arts/Stanford Park,
on Jun 3, 2015 at 3:31 pm


This is awesome news, and the idea of a place to go for the late evening, to spend time with friends with good food and drink, is music to my ears. Bistro Vida always been a great place, Ali and his staff are superb, but this could be the kick in the pants to take it to a new level. Can't wait to see!


Ali is an absolute gem and I encourage anyone interested in wonderful and unique cuisine to visit Bistro Vida. Ali will charm you.

I'm so glad that he is bringing Marine here and I look forward to seeing some new offerings!

By the way, Bistro Vida is not an expensive restaurant. I never considered it a "destination" restaurant like Manresa or Flea Street. It is far more informal. Please try it - especially for lunch.


I had dinner at Bistro Vida a few years ago and the food was awful. I never returned. Maybe I'll give it another shot now that there's a new chef who actually knows how to prepare french cuisine.

Report Objectionable Content
+   4 people like this
Posted by Christy, a resident of Menlo Park: Sharon Heights,
on Jun 8, 2015 at 4:04 pm


Now if only Vida would turn down its loud music, it might become a relaxing place to eat. Why must patrons have to listen to intrusive music (which is the owner's dubious choice)that makes it difficult to have a conversation?


Yippee! We love Bistro Vida and frequently find ourselves needing to dine on the late side. Knowing we could go there for great simple food up to eleven would be lovely. We'll be first in line to try the new dishes.