There will be a "treasure trove of memorabilia, fixtures and restaurant equipment from the former 500-seat restaurant," a press release reads. "Collectors and shoppers can explore a display of Asian influenced furniture, seating and decor, restaurant fixtures, kitchen cooking equipment and more."

For an incredibly detailed catalog of all auction items, go to charynauctions.com (scroll down to "upcoming auctions" on the bottom right).

"We had the privilege of serving this wonderful community for many years" Ming's owner Vicky Ching stated in the release. "During our recent closing, friends and long time patrons expressed an interest to acquire a few treasures and memorabilia to preserve their memories from Ming's history." 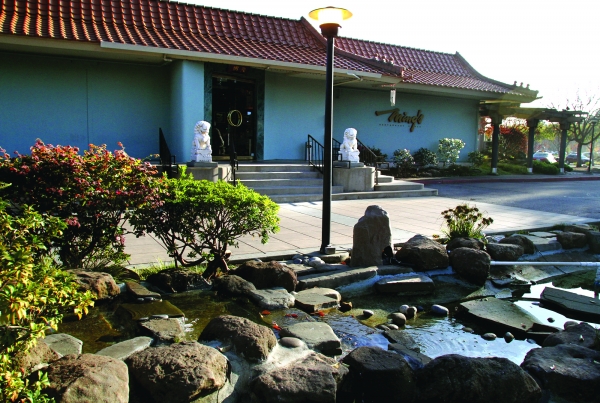 Ming's has served its famous Chinese chicken salad and much more from the 10,000-square-foot space on the corner on Embarcadero Road at East Bayshore Road, just east of U.S. Highway 101, since 1967 (though it originally opened at 4300 El Camino Real in Palo Alto in 1956).
A plan to demolish the massive restaurant and build a hotel have been in the works for years, with various false alarms about Ming's closure coming throughout 2014. The last day of business for Ming's as Palo Alto has known it for decades was Dec. 28, 2014.

Once the current building is leveled, construction on the four-story, 177-room hotel is estimated to take two years. A smaller Ming's ? one third the current size -- will reopen inside the hotel, though it will operate independently.

I wish Ming's would share the recipe for their fabulous Chinese Chicken Salad! Especially since it looks like they are selling and not coming back to re-open.

A quick Internet search actually turned up a recipe for Ming's shredded chicken salad, allegedly published in the Sacramento Bee on March 9, 2011.

The Sunset website indicates that the first time the recipe was published was 1970 by them.

Sadly, they do not offer the 1970 version of the recipe on their website.


Additional research seems to indicate that the November 1970 issue of Sunset is the one to seek.

Of course, it's likely that the recipe has evolved slightly to adapt to modern preferences (perhaps changing cooking methods like baking the chicken today instead of deep frying it as was done before).

claims to be based on the Frugal Gourmet's recounting of the Ming's recipe, so it would be dated prior to the 2011 Sac Bee recipe. The Frugal Gourmet version says to fry the chicken, which actually sounds more old fashioned.

This is very interesting, I would love to see the 1970 Sunset version of the the recipe, even likely would not be the way Ming's were making the salad a year ago.

Report Objectionable Content
Posted by Chicken Salad, a resident of Crescent Park,
on Feb 27, 2015 at 9:54 pm


Thanks! Continuing your search, I found the blow. I'll have to try it!

Chinese Chicken Salad swept the nation starting in the 1970's and 80's. That sounds funny--I get the picture of a truck-load of the stuff being dumped at every corner in every city! HA!It is unique, however, in that it has retained it's popularity. Like carrot cake, it has many devotees--and is wonderful for a simple lunch, brunch, or summer dinner. Since I posted the "Ming's Beef" from Ming's Restaurant in Palo Alto, I thought I'd better post their amazing, not-too-sweet-but-sweet-enough Chinese Chicken Salad. It was the first CCS I ever tried, and dang, it's good! So many of the others are just tooooo sweeeet! I got it off of "Askville.com" --the recipe was contributed by none other than bald food expert/actor Telly Savalas some years ago. He had it at Ming's and liked it too!

Note: I put a T finely chopped green onions in there, but it isn't part of the original recipe.

Deep-fry chicken 5 minutes, until crisp and golden. Drain. cut into lengthwise, julienned strips.
Skin should be left on for added flavor. Drop rice sticks into hot oil and rmove with slotted spoon as soon as they rise to the surface--which will be almost immediately. Drain on a paper towel on in a dish. Combine chicken with mustard, hoisin sauce, nuts, salt and sesame seeds in a salad bowl. Mix well. To serve, add fried rice sticks, shredded lettuce and cilantro. Toss, but not too much or it will get soggy!

Report Objectionable Content
Posted by Chicken Salad, a resident of Crescent Park,
on Feb 27, 2015 at 9:57 pm


Typo: Thanks! Continuing your search, I found the blow. I'll have to try it!

I meant: Thanks! Continuing your search, I found the BELOW. I'll have to try it!

Report Objectionable Content
Posted by Food nerd, a resident of Another Palo Alto neighborhood,
on Feb 28, 2015 at 12:45 am


I miss the mochi bunnies!!!

I found that one too, but did not mention it because it appears to be a third-hand account of a second-party interpretation with dubious provenance ("Telly Savalas posted this to Askville..."). Curiously, that recipe indicates no spice (no Chinese five-spice, no cinnamon substitute) whatsoever.

Also missing is lemon juice in the dressing which is a particularly strange omission, one really needs some sort of acidity for a refreshing salad.

Anyhow, enjoy all the recipes and good luck!

Actually, the "Telly Savalas" version has to be fake or a poorly written recounting. Telly Savalas died in 1994, about eleven years before the Askville.com site started running. Obviously he couldn't post from the grave, so it was someone else repost his work (or pretending to be him).

The Savalas recipe makes no mention of marinading the chicken, something the other recipes with better references all included. The previously mentioned omissions of Chinese five-spice and lemon juice in the dressing also point to some sort of ham-fisted fake in the Savalas version.

The "Savalas" version seems to be an extremely poor recounting of a recipe that may have its roots in the Eighties, but there are are too many glaring omissions to believe its accuracy.

The Frugal Gourmet recipe has some nuances and details that also point to a more deliberate recipe writer. The water chestnuts, the sesame seeds as a crust for the chicken thighs. Instructions to refrain from adding the noodles until the last moment to maintain crispiness.

Again, have fun with it!

Report Objectionable Content
Posted by whatever, a resident of Menlo Park: Central Menlo Park,
on Feb 28, 2015 at 9:25 am


Ming's was never across from Stanford University. According to its own website the restaurant opened at 4300 El Camino which was on the same side of El Camino as Stanford and over a mile south of Page Mill Rd.

Report Objectionable Content
Posted by Student of food, a resident of Mountain View,
on Feb 28, 2015 at 11:26 am


I've noticed over the years that (with exceptions and overlap, of course) this salad tends to be associated by people in Palo Alto and M'Park with Ming's; by people around Sunnyvale with Tao Tao Café; by those located in between (especially Los Altos), with Chef Chu's. All three restaurants have served it since the 1970s; all have customers who think that's where it was invented.

As often true for things past, most of the pertinent information isn't online but in print (and you'll never know how MUCH isn't online if you just look online!). Chef Chu published his version the first time over 30 years ago, I'll paraphrase from that source. Chu tosses shredded deep-fried chicken (which was cornstarch-coated, for crisp skin) in a basic dressing of sesame oil, water, powdered mustard (1:1:1), adds shredded lettuce, broken cilantro, slivered scallions; seasons with five-spice-flavored salt; finishes with crushed roasted peanuts, toasted sesame seed, and the deep-fried rice noodles. (His cookbook has further details on technique and variations.)

Despite Jay's speculation about "modern" adaptations, versions I try around the area remain pretty close to this. Mustard-sesame dressing, five spice, fried chicken. I haven't noticed much real change since the 1970s. Many Chinese restaurants added the dish to their menus to meet local taste for it (it joined the so-called Americanized Chinese repertoire).

Report Objectionable Content
Posted by Chicken Salad, a resident of Crescent Park,
on Feb 28, 2015 at 8:41 pm


Student of food: I don't agree they are all that similar. Based on your post, we ate at Chef Chu's tonight and the chicken salad was no where near as good as Ming's. Neither was the food in general.

Report Objectionable Content
Posted by Student of food , a resident of Mountain View,
on Mar 1, 2015 at 11:51 am


Sorry to hear of your disappointment! Maybe I was unclear: my point wasn't to suggest that all three restaurants named serve the same chicken salad, but that in trying it around the Bay Area since the 1970s I've found it generally based on certain core ingredients in common (mustard-sesame dressing, five spice, and in particular fried chicken -- answering an earlier comment). Some restaurants add other seasonings (as in the recipes here purportedly from Ming's), some sweeten it, etc. -- so it has house-recipe variations, in addition to batch variations, but they're recognizable for common roots and typical components.

To elaborate on my own experiences of restaurants named, I found Tao Tao's the least interesting; it seemed consistently to be made perfunctorily, in bulk, even slightly wilted (as if they expected to serve N gallons that night, therefore made it up all in advance, though probably not really). Chef Chu's I found inconsistent -- like all popular specialties at Chu's. I've been eating there occasionally for more than 30 years; I think Chu himself is a great showman, teacher, entrepreneur; but for whatever reason (I take it to be different hands in the kitchen), sometimes his much-touted comfort foods have been dull or "off." On occasion,* the restaurant can't even be blamed. But I recall his chicken salad at its best (including making it from the recipe in his cookbooks) as classic, mustardy and nutty, not sweet.

Lately I get the version at Chef Xiu in Mountain View (855 W. ECR near Shoreline), a slightly sweetened variant, but one that regardless of the dressing has always included superb crisp fresh fried chicken, even for take-out.

Report Objectionable Content
Posted by musical, a resident of Palo Verde,
on Mar 4, 2015 at 4:36 am


Sorry I missed the Mings auction. I was a monthly customer for 30 years.
How did it go? Anyone?

Report Objectionable Content
Posted by whatever, a resident of Menlo Park: Central Menlo Park,
on Mar 5, 2015 at 9:04 am


OK, auction's over, archive the article.

State Street Market plans overhaul of its eateries as it cuts ties with Bon Appétit, triggering layoffs
By The Peninsula Foodist | 11 comments | 4,268 views

Doing more with the natural spaces we have
By Sherry Listgarten | 8 comments | 3,102 views

Can the Memphis police behavior ever happen here?
By Diana Diamond | 16 comments | 1,196 views