I still haven't been able to get ahold of owners Cho and Daisy Yu, but a visit to the new location at 209 1st St. yielded some more details. The general contractor for the project said the couple is aiming to open by the first week of January. They'll be in during the holidays to prepare, he said.

The new space is a step up from the Yu's hole-in-the-wall at 213 California Ave. It' has a shiny new kitchen and "Cho's" written in vivid red signage both inside and out. However, the kitchen takes up the majority of the 650-square-foot space, so there's no indoor seating. The general contractor said there will be seating outside along 1st Street. 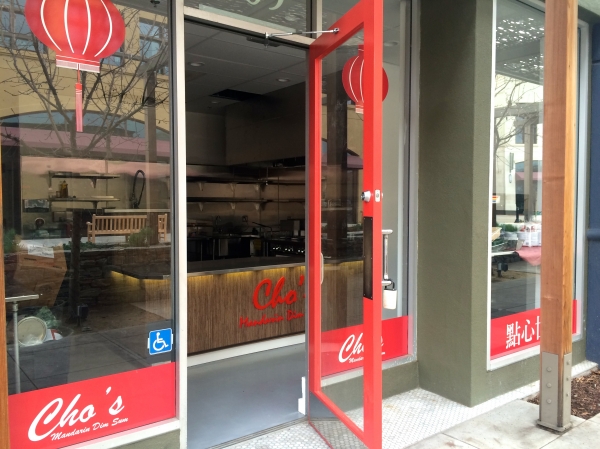 The reincarnated Cho's at 209 1st St. in downtown Los Altos, one storefront over from the corner of State Street.

Cho's will serve the same dim sum staples it was known for for so many years on California Avenue: dumplings, pork buns, potstickers, egg rolls and the like.

Someone seems to be updating the Cho's Facebook page somewhat regularly, so check there for opening dates and information.


Thank you, Elena for the update! I will be visiting them for sure.


It's no surprise you didn't reach Cho. You could hardly talk with him when his doors were open for service! :D If you called in an order, he would talk fast, get your order and hang up without even taking your name. The guy just remembered every single phone order and got them right every time. I hope he has more capacity now. In the old place sometimes you'd arrive at 12:15 for lunch and there would just be a sign which said, "Sorry no food." All of his food is prepared fresh, and when he'd have an early rush he might just sell out.

This is one of my all-time favorite restaurants. So glad to hear they're opening again.

A side note: Who authorized that terrible kerning on the "Cho 's" sign? Ugh!

Craving B. Patisserie's perfect pastries? The San Francisco bakery is popping up in San Mateo next week
By Elena Kadvany | 0 comments | 11,452 views

Spend some quality time with your thermostat
By Sherry Listgarten | 11 comments | 3,895 views

Which Christmas Gifts are Lasting?
By Cheryl Bac | 2 comments | 1,498 views