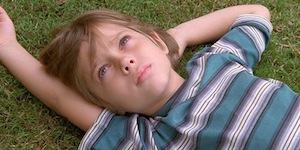 Believe the hype. Richard Linklater's Boyhood is an unparalleled look at a family over the passage of time. It was filmed over 12 years, starting in 2002, with the same cast. Unlike Linklater's Before Sunrise series, which also explores the passage of time, but from the perspectives of a couple, scenes from the film were shot over (roughly) a one-week period every year.

In Boyhood, newcomer Ellar Coltrane plays Mason, a boy growing up in Texas. When the film starts, he is 6 years old, and the shots reflect the magic and blur between imagination and reality during that period of childhood. He's dreamy and given to staring out of windows. It seemed evident Mason was based on Linklater?he later develops an interest in photography and like Linklater, he grew up with a struggling single mother in small town Texas. Towards the end of the film, Linklater gives Mason some of the usual philosophical pontificating he gives his characters in movies like Waking Life and Before Sunrise, but it is much more restrained and feels more accurate in the context of late adolescence.

Mason's divorced parents are played by Ethan Hawke and Patricia Arquette. In some ways they steal the show. While the physical changes in Mason over more than two hours present a remarkably smooth depiction of growth, he is an ordinary kid and the things that happen to him have been the subject of a lot of films. Although the parenting challenges are equally ordinary, they are so shown onscreen that they become wholly fascinating. The conclusions that the parents arrive at by film's end are normal, if a little bleak, and yet the way they're presented somehow seems to have existential gravitas instead of feeling worn.

Richard Linklater's daughter Lorelei Linklater plays Mason's sister Samantha who is a gregarious and extraverted performer at the start, but becomes more reserved?as many girls do?as the years pass.

Aside from the mini-arcs of the adult's relationships, the drama does not build continuously from start to finish. There is not much plot here, but that's not to say nothing happens. Linklater has noted to interviewers that he tried to capture moments from every school year until Mason's graduation: car trips, birthday parties camping with dad, parental fights, struggles with stepparents, pledging allegiance to the flag, bullies, and jobs. There are no real transitions from year to year, so the film passes much the way life passes?a lot of us barely notice time passing, but we look in a mirror one day and realize we look different than we did before.

The film is a similar project to that of the British documentary series Up, a set of films that follows the lives of fourteen British children from 1964, revisiting them every seven years. The Up series was criticized because, although it was a documentary, it was edited to create causal connections that were suspected by the filmmakers early on. Although it is seamlessly edited, Boyhood doesn't feel manufactured at all ?it feels like Linklater transferred his memories directly onto the screen.

In spite of its length?a whopping 166 minutes?and in spite of a usually limited attention span for very long movies, I didn't feel the need to get up once in the theater. Even after it ended, I wanted the film to keep going. This is probably the best film of the year. Be sure not to miss it at Aquarius and the Guild, starting July 25th.


Nice review. It's a shame that more filmmakers don't try to do ambitious things like this.


I felt it far less compelling than the Up series due to the fact that Boyhood is entirely scripted. I'm more of a fan of "You can't make this stuff up" reactions, but in Boyhood, you can, and it was, so it pulled much less on me than did the Up movies.


Thanks for reading and your comments, Dylan and Mike.

Report Objectionable Content
+  Like this comment
Posted by Max Hauser, a resident of Old Mountain View,
on Jul 25, 2014 at 6:50 am
Max Hauser is a registered user.


Looking forward to seeing it. The famous Michael Apted documentaries (lately dubbed the "Up series") were certainly compelling, though they've faded from popular consciousness compared to their heyday before and around 2000 -- since the series was avowedly intended to follow a group of 1960s children who would become "adults of 2000;" also, some of its key players dropped out as the series continued.

I thought Linklater's signature work was not his later dramas with "philosophically pontificating" characters, but the earlier, pioneering "Slacker" and maybe also "Dazed and Confused," both of which seemed to draw on his own experiences growing up around a Texas university town. (Possibly this resonance reflects growing up myself in a more notorious university town whose own eccentrics -- natural, affected, or professional, but almost always imported -- could make Slacker's counterparts seem mild and charming by comparison.)


Hi Max - thanks for your comment. I compared "Boyhood" to "Before Sunrise" because both are about the passage of time and involve characters that are clearly trying to figure life out. To me, they are closer projects than "Boyhood" is to "Dazed and Confused." Like "Slacker" though, "Boyhood" is (mostly) plotless and has a strong sense of place/Texas.

A tea house, a speakeasy, a beloved restaurant: The Van's in Belmont has closed for good
By Elena Kadvany | 8 comments | 11,126 views

Why I am suspicious about PA’s budget cuts
By Diana Diamond | 34 comments | 3,431 views

We are testing geoengineering, and that is a good thing
By Sherry Listgarten | 30 comments | 2,741 views