Call it a novel: Dirty Love by Andre Dubus III

Uploaded: Jul 22, 2014
Lucky is the fiction writer whose stories take 300 pages to tell. For the last twenty years at least, the fiction market has been mainly a market for novels. Agents tell young talent proffering brilliant short stories to hurry up and write a novel. Writing teachers warn their students that while short stories may be fine for polishing your chops, eventually you will have to write something longer, if you want to eat.

Problem is, not all stories take 300 pages to tell. What are we supposed to do with the smaller ones? Throw them back? Unlike fish, short stories are not going to swim away and come back next year as novels. There is a solution, but to explain how it works we have to back up and ask ourselves why we prefer novels. I believe that readers want their attention held by a particular situation, a single cast of characters, for the entire length of the book. In the traditional short-story collection, situations change frequently; every twenty pages you are introduced to a new cast of characters, a new situation, maybe even a new narrative voice. Story collections are great at demonstrating the breadth of a writer's talent but poor at holding the reader's attention. And if we're talking about commercial publishing, attention is everything.

This isn't a new insight. For years, writers have "linked" their short stories in ways that makes a collection of them feel cohesive. The earliest major example is probably Sherwood Anderson's Winesburg, Ohio (1919). Anderson's book is often called a novel, but the subtitle ("A Group of Tales of Ohio Small-Town Life") suggests that Anderson thought of it as a collection. When I was in college in the 1990s, the fashionable term for a Winesburg-style collection was "short story cycle," which implies that the stories, read in order, create a single narrative arc, as in a novel. Eventually publishers realized that the links between stories in a cycle could be so strong, the boundaries so fluid, that they could call this type of book a "novel in stories." Finally they ditched the word "story" altogether. If Winesburg, Ohio were published today, it would be called a novel, no subtitle.

No book signaled the acceptance of the linked-stories format more clearly than Jennifer Egan's 2010 novel A Visit from the Goon Squad. Egan's book was not only billed and reviewed as a novel, but it won the Pulitzer Prize for Fiction (an award traditionally given to a novel and known, originally, as the Pulitzer Prize for the Novel). Each chapter of Egan's book follows one or two characters drawn from a cast of dozens. She moves back and forth in time between chapters, and while some of the chapter-protagonists reappear in other stories, it is never for more than a cameo. She also varies the narrative voice, with the longest chapter in the book taking the form of a PowerPoint presentation. It is, in many ways, less cohesive than Winesburg, Ohio, but I have never heard it called a linked-story collection, much less a "group of tales."

You might ask yourself, then, if the way is paved so solidly for books of linked stories to be called novels--and to enjoy the riches and acclaim reserved for novels--why are some books of linked stories still billed as such? A recent example is Dirty Love by Andre Dubus III (best known for the 1999 Oprah pick House of Sand and Fog). Dubus's new book is described in the flap copy as "linked novellas," but it bears no category labels on the cover or title pages. There is a table of contents listing the four novellas and their page numbers, but that might as easily refer to chapters in a novel. Which in a sense they are: The four novellas are set in the same small town (a twenty-first-century New England Winesburg), and characters have walk-on roles in other people's stories (as in The Goon Squad). The tone is consistent from chapter to chapter, a somber and overcast malaise, as are the themes of adultery, loneliness, and surreptitious observation. It's not a happy book, but it's a good one. I dislike story collections for the same reasons everyone does--the disappointment of an engaging story ending too soon, of resetting your bearings every few pages--but Dubus held my attention so deftly I sometimes felt he was toying with me, like he knew I was skeptical of his "linked novellas" but wanted to prove his point. His characters are rendered with such loving detail, physically and psychologically, that I was satisfied letting them go after fifty or seventy-five pages. After finishing the book, I did wonder why, when these stories were so obviously cut from the same cloth, he didn't just weave them together. I can imagine a version of this book organized chronologically, where we dip in and out of the various characters' stories, rather than having each character's story told, start to finish, in a discrete section. The book might have been less lumpy--the title novella, which concludes the collection, is twice as long as the other three. It might have felt more like the novel that the publisher seems to suggest, by omission, that it is. But it's his book, not mine. I'm just grateful Dubus gave us these characters, in whatever order, with whatever label on the cover. 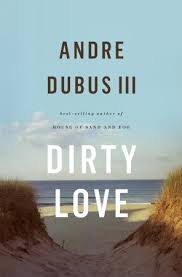 That's funny, I just name-checked (and vowed to re-read) Winesburg, Ohio on my blog: Web Link Palo Alto needs a George Willard to get to the bottom of what is going on here; not sure how close to that I can come; I'm either running for Council to spice up my blog, or writing a blog to forward my campaign. Plan B would be, if not elected, to grow my blog to compete more seriously with...Palo Alto Weekly . Looking forward to reading more Nick Taylor (sounds like a Hemingway character name, or a Hammett...) I take this as an omen...almost makes up for being basicly dissed by GS of the Weekly. Some earlier Andre Dubus 3 sit on my desk unread, although I am fixing to re-read Broken Vessels about his father's demise. I recall sitting on the lawn, with Star Teachout, waiting for Dubus II to show up only to learn, from a note on the door, that he had taken ill (and soon after we learned that he had died). Robert Penn Warren is also calling out to me, All The King's Men. Those who don't re-read the classics enough are condemned to live thru them.