Sacred Games by Vikram Chandra: The Best Show Not on Cable

Uploaded: Jul 2, 2014
I know I promised to read shorter books, but the novel I picked up after The Goldfinch was even longer: a 900-page gangster epic by UC Berkeley professor Vikram Chandra, Sacred Games. This one took me a long time to read -- in fact I had to beg for a special dispensation from the library after reaching the 12-week maximum checkout period -- but if Chandra had continued the story for another 900 pages, I would have kept on reading (library permitting).

Published in the U.S. in 2007 (2006 in India and the UK), Chandra's novel was praised for as much for its comprehensive portrait of Mumbai as for its ingenious twist on the detective-novel genre. The Hindustan Times (an English-language Indian newspaper) declared it no less than "the greatest book on Bombay ever written." Laura Miller of Salon.com addressed perhaps the main concern of prospective readers when she wrote that the novel has "a satisfying completeness that's all too rare among today's baggy, doorstop novels." Miller omits the adjective "Indian," but we know what she means: the "Indian doorstop novel" has become a genre of its own, thanks to titles like Vikram Seth's A Suitable Boy and Rushdie's Midnight's Children, which sit unread (or unfinished) on the shelves of half the people you know, if not your own. The publishers of Sacred Games didn't do much to discourage the association: the faded-red cover makes the hardback edition look like a brick. 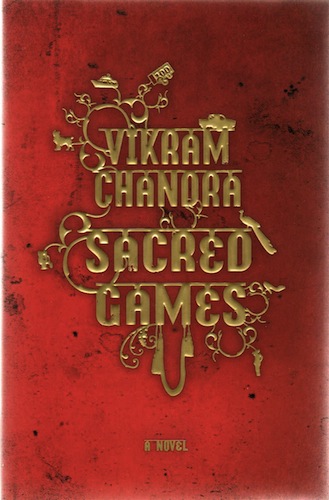 But here's the thing about Sacred Games: it reads quickly. I know I just said it took me three months to finish, but I was reading other books at the same time. The trick, I think, is to approach Sacred Games not as a novel but as a substitute for serial TV. Do you like The Wire? Breaking Bad? Like those shows, Sacred Games uses the devices of crime fiction to deliver a story more nuanced than anything you've experienced in the crime genre. It requires about the same time commitment as an HBO show, but the payoff is far greater: the story happens in your head, so it's more personal. You're not beholden to a director to show you what Mumbai looks like. Also India tastes better than Baltimore.

Chandra's protagonist, Sartaj Singh, is a Mumbai version of Jimmy McNulty: divorced, hard-drinking, addicted to the adrenaline rush of his job. Like McNulty, Sartaj is an unlikely golden boy, a star of the police force, with friends in high places and the nerve to call on them. His greatest obstacle is disillusionment, and in Chandra's Mumbai, there is plenty to be disillusioned about: corruption at every level of government, from beat cops to high-court judges; organized-crime networks operating as de-facto local governments in large swathes of the city; women and boys bought and sold for sex. And that's just the first hundred pages. The novel's antagonist, the gangster Ganesh Gaitonde, is a hero-villain of the Walter White school: a highly-intelligent opportunist with an undeniable gift for illegal work, in this case logistics. Gaitonde starts his career in the traditional rackets of organized crime -- protection, extortion, contract killings -- but these eventually lose their interest for him, and he moves on to other pursuits. The plot gets juicy when, a few centimeters into the book, he starts smuggling arms for a Hindu nationalist organization.

Chandra shifts back and forth between the perspectives of the gangster and the police inspector, with occasional detours into the lives of incidental characters such as an Indian intelligence analyst who hires Gaitonde for various extra-legal operations. The cast also includes a world-famous guru, a high-end madam, and a Bollywood starlet. There's sex, poetry, and plastic surgery. And religion, of course, but Chandra never dwells too long on the specifics. Religion, in the Bombay of Sacred Games, is just another tribal marker, as changeable as skin.

This summer, try an experiment: next time a friend recommends a TV series, go to the library and get Sacred Games instead.