Cocina Central, the brainchild of South Bay restaurateur Randy Everman and southern California Latin-fusion chef Isabel Cruz, is the latest eatery to snag a space at the new center, which is quickly becoming a foodie destination. Higher-end chains in a similar vein like Paul Martin's, Pacific Catch, Veggie Grill and Pizza Studio have already staked their claim.

Cocina Central's tagline is "ridiculously good urban Mexican food." The restaurant offers Mexican staples jazzed up with farm-to-table sensibilities. All ingredients are organic, locally sourced and tortillas, made in house, are made from sourced non-GMO masa.

Starters include ceviche verde ($12); grilled corn with cheese, jalapeno butter and cumin ($4) and shrimp salpicon ($13). Salads range from $10 to $12, with a kale salad at the lower end (kale, pepitas, pineapple salsa, tortilla chips, cumin vinaigrette) and a "mexi" burrata with buratta, heirloom tomatoes, cilantro-basil drizzle and balsamic at the higher end.

Everman envisions breakfast as a community-serving option that will establish Cocina Central in the area.

"We want to be that great community restaurant," he said. "I want to be who you think of in Mountain View to have this phenomenal soy chorizo scramble with fresh tortillas and great salsa or boysenberry pancakes. Whatever your thing is, it will be fabulous."

What might also attract the community is a full liquor license, meaning cocktails like the "mexi mule" (twist on a Moscow mule but with jalapeno tequila instead of tequila or gin), Mexican smash (tequila, strawberries, jalapeno, clitrano, house sour) or orange mezcalita (reposado honey tequila, blood orange, lime, mescal). Drinks range from $8 to $12. There's also brews on draft and by the bottle. Brunch cocteles include central bloody maria, class mimosa and a pomegranate mimosa.

Everman comes with years of experience, most recently spent as a senior project manager for the company that owns Santana Row in San Jose. The job brought him close to many restaurant projects there, titillating his interest in starting one of his own. Some years ago, a friend introduced him to Isabel Cruz, who owns and operates six restaurants, including Isabel's Cantina in San Diego. The two often talked shop about opening one together, but it wasn't until the San Antonio space ? at the hard corner of El Camino Real and San Antonio ? fell into their laps that they decided to run with it. 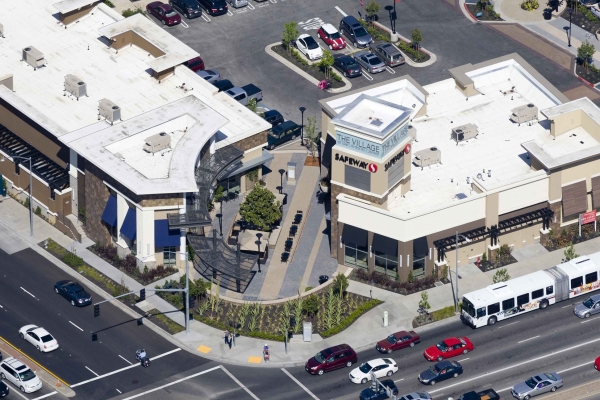 Above: The shopping center at the corner of El Camino and San Antonio. Cocina Central will occupy the space on the right below the Village/Safeway signage tower. Courtesy Heckmann Communications.

Everman said the space is "quite modern," with two large graphics dominating the space (one, a 5 by 20 foot photograph of a cornfield and the other, a nine by 24 foot photo of a colorful city block). There will also be ample outdoor seating.

Cruz's Latin-fusion cooking is the inspiration for Cocina Central. Take a look at her recently published cookbook to get an idea. She'll be in the Bay Area four to six months out of the year to head the Cocina kitchen, of which Everman said they hope to have two or three more of after opening in Mountain View.

Everman said they're hoping to open the last week of July, but it could be early August.

FYI, Restaurant is actually owned by Public Table Restaurant,LLC with plans to open 2nd one in San Jose at Oakridge Mall in 2015. Isabel Cruz is the driving force behind this concept as she owns several successful restaurants in the San Diego area as well as Oregon. The new opening date looks to be early September.

Three new restaurants from former Manresa chef David Kinch and his team are coming to Los Gatos
By The Peninsula Foodist | 1 comment | 4,145 views