Uploaded: Feb 24, 2014
In most lines of work, seniority counts for something. In major-league baseball, for instance, young players in their first few professional seasons have their salaries capped by the players-union contact. A young player can expect to make significantly less than an older player with similar statistics. The reason, in short, is seniority. For each year a player remains in the big leagues, he is paid a little more, until after six years of service, he may file for free agency and let the market determine his price. The system has all kinds of bizarre effects, for example when a player emerges as a superstar in his first year in the league, as the Angels' Mike Trout did in 2012. That year Trout won the American League's Rookie of the Year award and finished behind only Triple Crown winner Miguel Cabrera in MVP voting. In 2012 Trout was paid, like all rookies, the league minimum salary of just under $500,000. Cabrera, who was in his tenth season, made $21 million. The following year, Trout got raised to $510,000. Once again he finished second in the MVP race, again to Cabrera, who drew another $21 million.

It's not fair, sure, but you have to pay your dues.

Now take the system I've just described and flip it over: that's how novelists are paid. In publishing, rookies often earn more than veterans. First novels routinely attract larger advances than second or third novels by the same author. The reason is simple: first-time novelists are untested in the marketplace. For all the publisher knows, this person could be the next Amy Tan or Stephen King. Without a sales record from which to extrapolate future demand, publishers have no choice but to evaluate the manuscript on its merits--with a bit of hype thrown in by the author's agents--and make their best offer. When more than one publisher is determined to land a much-hyped first novel, a bidding war ensues. Sometimes an author with hardly a short story credit to his name can find himself a millionaire. The most recent example is City on Fire, a 900-page novel by first-time author Garth Risk Hallberg that sold recently for $2 million.

$2 million. That's four times what Mike Trout earned last year. (And everybody says baseball players are paid too much!)

As you know from my previous posts, the sales figures from my first two novels, The Disagreement (Simon & Schuster, 2008) and Father Junípero's Confessor (Heyday, 2013) were not stellar. My opportunity for large, speculative advances had come an gone by the time I started writing the baseball thriller. As a brand, Novels by Nick Taylor? had been tested in the marketplace, and the resulting price was low. All of my future work will be measured against that sales record. In other words, I could write the best damn baseball thriller ever, the kind of book people stay up all night to finish, and I would be paid like I'd written a sequel to The Disagreement. That's what the industry--and, to be fair, the reading public--had determined a Nick Taylor novel was worth.

But what if I weren't Nick Taylor?

Before you hit Comment and shame me for dishonesty, let me remind you of some of the eminent writers who used pseudonyms: Samuel Clemens (aka Mark Twain), Charlotte Bronte (aka Currer Bell), Mary Anne Evans (aka George Eliot)...okay, maybe I'm being disingenuous. Bronte and Eliot took men's names to escape gender discrimination. A better comparison is the contemporary novelist Joyce Carol Oates, who has published forty novels under her own name and eleven under the names Rosamond Smith and Lauren Kelly. Oates isn't trying to escape anything; she uses pseudonyms to indicate the genre of a particular book. "Joyce Carol Oates" means a literary novel. "Lauren Kelly" means a thriller.

My decision to use a pseudonym was a mix of three factors: one, I wanted to create a new brand for work in a new genre (like J.C. Oates); two, I was hoping to escape my dismal sales record; and three, I thought it would be fun.

In case you're wondering, "T.T." doesn't stand for anything. I just happen to like names with a repeated initial (ee cummings, A. A. Milne, Z.Z. Packer, B.B. King, J.J. Abrams, C.C. Sabathia).

When I finished the book, my agent agreed to send it to editors under the pseudonym, but she recommended that we not keep my identity a secret. If an editor asked who I was, she believed we should answer honestly. I agreed. When the responses came back, some editors asked, and others didn't. We eventually sold the book to Doubleday, the imprint responsible for heavyweights like John Grisham and Dan Brown. The advance was modest -- a rounding error in the Grisham and Brown accounts -- but it was something. It wasn't a first-novel payday, but I felt good about the deal. The editor was young, enthusiastic, and full of ideas for the manuscript. Even better, he was comfortable with me being T.T. Monday, even though he knew who I was. He even offered to let me publish the book as Nick Taylor.

In the end I went with T.T. By that point I was invested in the idea of a new brand. I even had a new website. I hadn't escaped my sales record (those numbers will be chiseled on my tomb), but I had reset my own expectations. As T.T. Monday, I had new hope of reaching a wider audience. On March 11, we'll see what happens. 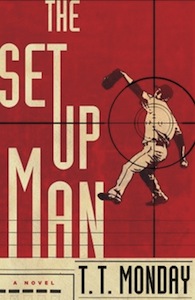 T.T. Monday will be appearing at Kepler's Books in Menlo Park on Tuesday, March 11, at 7:30pm. The reading is free and open the public.

I'm glad to know why you used a pseudonym, Mr. Taylor. Is there any significance to the "Monday"?
Also, just so you know, mine is a pseudonym too. But I really do live in San jose!
Good luck with the sale on this!

Report Objectionable Content
Posted by Lary, a resident of another community,
on Mar 30, 2014 at 9:25 am


First, congratulations on the book. There\'s nothing easy about writing or publishing a novel so no matter how it turns out, you\'ve done more than 98% of the would-be novelists out there.

Second, it\'s kinda funny that you encourage people to use their real names when commenting about a column about fake names. That\\\'s a hoot right there.

I stumbled across this article because the T.T. Monday web site has absolutely no "About" information identifying the author, which is why I wouldn\'t buy it. I think something like you have here should be added there to provide some background about you. I think your previous novels are a good thing, it shows you have knowledge of your craft and writing experience. By explaining the name as you\\\'ve done here, it adds some intrigue. With nothing, some might think it\\\'s intrigue. I think it\\\'s blank and I\\\'m moving on.

Report Objectionable Content
Posted by K.Kelton, a resident of another community,
on Apr 7, 2014 at 9:59 am


Let us know if you come to southern California for a book tour. We would be interested in arranging something for our community.


Report Objectionable Content
Posted by Karen, a resident of another community,
on Feb 22, 2015 at 8:27 pm


I just finished The Set Up Man. I felt this book was written for me, a reader of the detective genre, and baseball non-fiction. I was sure the author would be a former major league player, and that I was getting a real glimpse into what it is like to have that life. Oh well, I still enjoyed the book and hope you will write others like this. BTW, I'm a Red Sox fan, and a former Orioles fan, so I get that change in fandom thing.

Report Objectionable Content
Posted by Lynne, a resident of another community,
on Mar 10, 2016 at 3:21 pm


I read about Double Switch in the review in the San Jose Mercury on Saturday (when that part of the Sunday newspaper is delivered). I ordered it and The Set Up Man immediately to my Kindle. I finished the first and am 79% into Double Switch. Both great books and I have been recommending them to friends, especially those who love to read and also love baseball. In fact one friend who I talked to about the books this morning at our Willow Glen Starbucks has a son who played baseball at SJSU before he was drafted.
Funny about the name: in Willow Glen we have a local restaurant called Tomato Thyme, which when texting to meet there, we all call it TT.