﻿ Turning to a Life of Crime (The Story of a Novel, Part 2) | On the Page | Nick Taylor | Palo Alto Online |
NEWS ALERT:Military shell, grenade found in Old Palo Alto home

Turning to a Life of Crime (The Story of a Novel, Part 2)

Uploaded: Feb 18, 2014
In my last post I explained how I went to India and came back with a novel about the California missions. That book, Father Junípero's Confessor, was published last fall by Heyday, an independent publisher in Berkeley, and although I haven't seen sales figures, I would not be surprised if more people read this blog post.

Think about that. This post will take at most a couple of hours to write and revise. Father Junípero's Confessor took me six years to complete. I have no idea how many hours I spent, but it's well into the thousands. I'll be lucky if Father Junípero sells in the thousands of copies, which means I spent an hour per reader.

Maybe that wasn't the best use of my time.

As a writer, what I want most of all is to be read. More than money, more than prizes and critical acclaim, I want readers. I like to be alone -- I wouldn't have chosen this profession if I didn't -- but I've always thought of writing as a kind of asynchronous performing art. The artist and the audience are not in the same room at the same time, but the writer is putting on a show. I always imagine my audience as I write. Will they laugh? Will they believe this character or that scenario? Viewed this way, and knowing how many solitary hours go into writing a book, the exercise hardly seems worthwhile if no one is reading.

Two books in, I had failed to attract a significant audience. Where was I going to find readers? Broadly speaking, I had two options: (1) draw the readers to me, or (2) go where the readers are. Option #1 is not really a strategy; I have always tried to draw readers to my work. I'll talk more about publicity in a subsequent post, but for now let's assume that short of dressing up like a friar and swinging an arrow on the corner of El Camino and Embarcadero, I was already doing everything I could.

Which left option #2: go to the watering hole.

After romance, the next most popular genre in fiction is crime. There are a hundred different sub-genres of crime fiction, from thrillers (like Harlan Coben) to cozies (like Agatha Christie). The distinctions between the genres can be inscrutable to outsiders, but they have serious implications. A fellow writer recently told me this joke: What's the difference between a mystery and a thriller? Answer: about six zeroes on the advance. Taken together, the many genres of crime novels account for about 8.5 percent of the book market. That's only half the market share of romance, but still twice as much as literary fiction.

The best part about crime fiction was that I knew it as a reader. Of all the crime genres, my favorite is hard-boiled, specifically West Coast noir of the Chandler/Dashiell Hammett/James Elroy/Robert Towne variety. As I was explaining to my daughter the other day, a hard-boiled detective is cool in every situation, surprised by nothing, and never lets on that he's scared. A protagonist with this kind of temperament lends himself well to the type of bare-bones narration I prefer: no long passages about the scenery, no dissections of the hero's frame of mind.

If I were to attempt a detective novel, my character would be cool but contemporary, like Marlowe without the fedora and trenchcoat. But how would I distinguish my hero from the thousands already on bookshelves? What would be his milieu? This is what writers mean when they talk about material. Material is what compels the readers to the book before they know your characters. It's what, and sometimes where and when, the story is about. The Great Gatsby, for example, is about the Jazz Age; One Flew Over the Cuckoo's Nest is about mental institutions; Watership Down is about rabbit societies. Material sometimes overlaps with theme, but they are not the same thing. You can use many different kinds of material to tell a story about racism, for example. Invisible Man and To Kill a Mockingbird share a theme but not material.

To stand out, my detective novel needed fresh material -- what Father Junípero would have called "unworked soil."

Back to India... I am in my apartment, eight stories above Hyderabad. It's hot, over a hundred for the thirtieth day in a row. The windows are all open, the ceiling fans are spinning like crazy. From the vacant lot behind the apartment complex, a dirt-and-trash expanse haunted by the neighborhood cows, I hear boys playing cricket. This is not unusual. There is nearly always a game of cricket going on in that lot. From mid-afternoon till sunset (and sunup to sundown on weekends), boys of all sizes are out there yelling at one another, taking turns with a wide paddle-shaped bat and dashing back and forth between wickets made of cinder blocks. 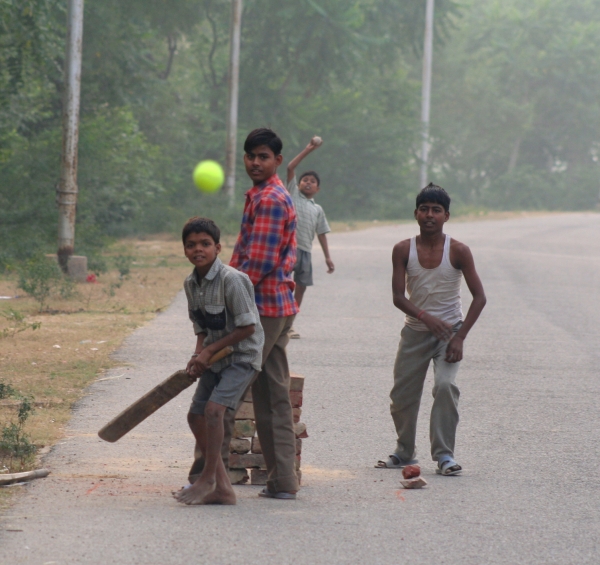 Cricket is a national obsession in India, more popular than all other sports combined. I knew nothing about the game when we arrived, so a friend sat me down in front of a televised match and explained the rules. It's a lot like baseball, with nearly the same number of players and lots of the same terminology (innings, runs, outs). One major difference is that in cricket a player comes up to bat only once per match. Once he's out, that's it for him -- but an at-bat can last over an hour. Sometimes when a match was on, I would watch a few minutes while waiting for our driver, then go to the grocery store, and when I was in the checkout line I might hear on the radio that the same batter was still up. In that time he might have scored fifty runs. Or he might have reached the milestone of a hundred runs -- a "century." Cricket is played on a circular field, with the two wickets in the center. Most hits are good for one run, but if you hit the ball to the boundaries, you earn four runs -- or six if it gets there on the fly, like a home run in baseball. Terminology aside, the strongest parallel between cricket and baseball is the pace: generally slow with bursts of intense action. It felt familiar to me. I began to watch matches, and before I knew it I was reading box scores in the morning paper.

I should mention that thanks to the Internet, I was never out of touch with baseball. In fact I was closely anticipating the 2011 season. The previous fall, the Giants had won their first World Series since moving to San Francisco, and even though I grew up a Dodgers fan, I had fallen in love with the thong-wearing, bearded band of misfits and castoffs who beat the odds in 2010. I was counting down the days until spring training, when the Giants would begin defending their championship. I watched the opening-day festivities from afar -- literally the other side of the world -- but the distance only seemed to intensify my interest. Thanks to an eleven-and-a-half-hour time difference, I watched night games on my computer over breakfast. I hadn't followed baseball this closely since middle school. No doubt the Giants renaissance was partially responsible, but so was the expatriate effect -- the same urge compelling me to write about the missions. 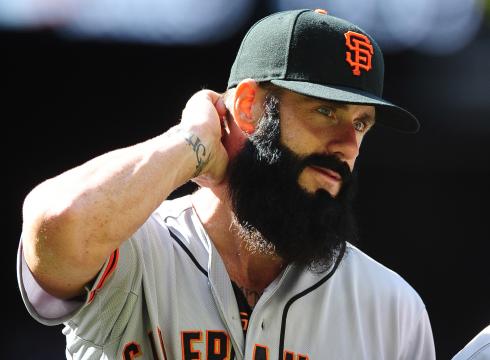 One morning after the last West Coast game ended and everyone went to sleep in America, I put down Father Junípero and opened a new window in the word processor. "Dad wasn't a ball player," I wrote, "but he told me that if I wanted to make some easy money I should be a left-handed pitcher." By noon I had a thousand words (normally it takes me all day to write that much). For lunch I ate some leftover daal and ran back to my room. By the end of the day I had something like 3500 words describing an aging left-handed reliever with a sideline in detective work. He was divorced. His ex lived in Santa Monica with their daughter. I went to bed that night on fire, wondering what would happen if I skipped class the next morning to stay home and write. I ended up teaching, but when I got home I picked up where I'd left off. By the end of the week I had the beginning of a plot, a good working title, and most importantly my detective: Johnny Adcock, The Setup Man, was in business.

Next time: Who is T.T. Monday?

Cathy Kirkman is a registered user.


Hi Nick, nice post! I think it's great that you are writing in different genres. Perhaps you could publish Father Junipero serially on the blog, or at least some excerpts? I guess that depends on the publisher. Anyway, I grew up on Agatha Christie, so that's my favorite mystery subgenre, along with Sherlock Holmes. Today my reading habit is to alternate reading a classic that I haven't read before (life is short), and then relaxing with a mystery, spy novel, western, etc., and then doing another classic, apart from some concurrent nonfiction reading. Since you are an English professor as well as a writer, I am wondering if at times you might share some thoughts on approaching American and English literature, world literature, authors, etc., (a small topic I realize). For example, I reveal my limitations by saying I feel like having just finished Brideshead Revisited, it would have informed my reading of The Awakening, etc. Thankfully I read The Dubliners and Portrait of the Artist before attempting Ulysses, but I had to turn to scholarship to try to make sense of that. Regards, Cathy

We need an audit of city spending
By Diana Diamond | 9 comments | 2,053 views