Maureen Hardy, a representative from BCV Architects, the San Francisco-based firm designing the space for Bibigo, said the owner is not ready to talk about the project yet. (BCV Architects is also behind multiple notable food marketplaces ? the Ferry Building in San Francisco, Oxbow Market in Napa, Jack London Market in Oakland ? as well as local restaurants such as M.Y. China, Gott's Roadside and Hog Island Oyster Co.)

However, Palo Alto City Planner Elena Lee said BCV Architects' application includes minor façade changes and a new rooftop outdoor dining area. (Anyone who walks by the Apple Store and checks out the application posted in the window can see a rendering for what the redesigned building might look like.)

The posted application also includes a request for an alcohol service permit. Here's hoping for a full bar. 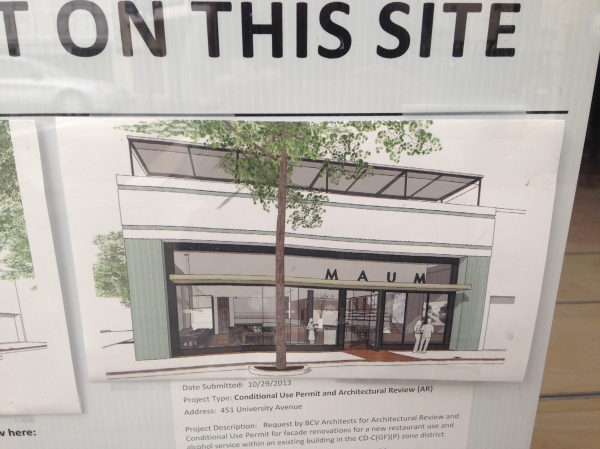 Maum is a Korean word that means "mind, soul and spirit," but it's unclear what happened to Bibigo. City Planner Elena Lee did confirm that the proposed project is for a "Korean service restaurant."

Report Objectionable Content
Posted by Eric, a resident of Old Mountain View,
on Nov 22, 2013 at 6:26 pm


From the headline, I somehow thought it would be Samsung


Sounds like a fun restaurant. We're looking forward to trying it.


Is there a reason we should care if it\\\'s a Korean "chain" restuarant that\\\'s going in there, or a one-off joint without the chain affiliation. "Chain" often conjures up images of cookie-cutters. And in light of the Palo Alto senior who is being detained in North Korea, I think when he is released and returns home, he should have the honor of cutting the ribbon.


To all you haters, this is a South Korean chain. In case the last time studied world history was more than half a century ago, South Korea and North Korea are two different countries. Don't hate the company because of something going on in a completely different country.

I like the idea of a having a few foreign chain stores and chain restaurants here since they have more direct access to pop culture and trends in their home countries. A lot of Americanized ethnic cuisine (European and Latin American as well as Asian) has gotten real stale since it left their home countries and companies like this can liven it up again. I just hope that they don't water down their food for American tastes.

Yes, there are reasons one should care about whether or not a restaurant is independent or a chain.

Chain restaurants often cowtow to corporate headquarters that are located elsewhere. This also means that the restaurant profits don't stay within the community.

Want to go grocery shopping? Costco, Whole Foods, Trader Joe's, Safeway, Piazza's? Costco is based in Washington, Whole Foods is based in Texas. Trader Joe's has a German holding company. Safeway's headquarters are in the Bay Area, Piazza's has two locations -- both on the SF Peninsula (I believe the administrative offices are in RC).

Anyhow, do what you want with your money. It's your conscience.

Report Objectionable Content
Posted by Food Police, a resident of Midtown,
on Nov 25, 2013 at 8:40 am


To Don't Hate: yes, we have seen the marvelous success chains have had in other countries importing popular culture. Like McDonalds and KFC in virtually every country around the world they can pollute with what they can fool the locals into thinking is actually food.

Report Objectionable Content
Posted by Food Police, a resident of Midtown,
on Nov 25, 2013 at 8:40 am


To Don't Hate: yes, we have seen the marvelous success chains have had in other countries importing popular culture. Like McDonalds and KFC in virtually every country around the world they can pollute with what they can fool the locals into thinking is actually food.

Report Objectionable Content
Posted by mandarin, a resident of Rex Manor,
on Nov 27, 2013 at 7:41 pm


I wish it was Samsung that moved into this space. That would have sent a message to Apple.

Report Objectionable Content
Posted by SCB, a resident of another community,
on Nov 27, 2013 at 11:35 pm
SCB is a registered user.


Apple does not need any messages from Samsung. Samsung just has to stop stealing Apple's ideas. Apple trusted Samsung to build some things for them, and then Samsung steals the ideas and builds them and wants to sell them as their own. Samsung does not deserve to be trusted any longer. I wouldn't give Samsung another project if I were the Apple company.

Report Objectionable Content
Posted by resident, a resident of Downtown North,
on Nov 28, 2013 at 8:09 am


I just hope it's not another restaurant that sounds good, looks good and then disappoints with the food. Has been the case with Tacoliscious, Palo Alto Grill, and Sam's Chowder house.


Report Objectionable Content
Posted by Resident, a resident of Another Palo Alto neighborhood,
on Nov 28, 2013 at 8:20 am


Stanford SC definitely needs better options for eating, particularly a quick, healthy lunch for those trying to shop in their lunch hour. With free parking, restaurants that are open for dinner will do well also.

Report Objectionable Content
Posted by Samsung, a resident of Downtown North,
on Nov 28, 2013 at 6:30 pm


Samsung is in Palo Alto, across the street in the Borders/New Varsity if one kept up with current events; 456 University, they could throw a softball from their office across the street to the old Apple Store.

Report Objectionable Content
Posted by Alan, a resident of Charleston Meadows,
on Nov 29, 2013 at 7:34 pm


I'm glad the plans include keeping the glass at the front of the building and open to light. Also hope the owners include some "fusion" items like Korean Taco's or Kimchi egg-roll and in addition to the Korean food.

How Much Time do You Spend Outdoors?
By Chandrama Anderson | 0 comments | 1,696 views