A book of fiction can be memorable in a number of ways -- the setting may stick with you, or the characters -- but in my view the mark of a truly memorable novel is when you begin to speak its language. My favorite example of this phenomenon is Anthony Burgess's 1962 novel A Clockwork Orange, for which Burgess invented an ersatz teen-speak based on his study of Russian. In an essay included with a recent Norton edition of Clockwork Orange, Burgess explains that he made a conscious decision not to emulate the speech of contemporary British teenagers when he was writing the voices of the protagonist, Alex, and his murderous cronies. He recognized that teen slang evolves rapidly, and that Alex would have sounded hopelessly quaint to future readers if he'd used words like "dodgy" and "babe" instead of "malenky" and "devotchka." 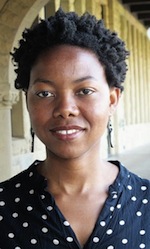 Like Burgess, the Zimbabwean author NoViolet Bulawayo pays close attention to youth jargon in her hilarious and deeply moving first novel, We Need New Names. I've chosen Bulawayo's book as the first topic of this new blog not only because the author is currently a Stegner Fellow in Creative Writing at Stanford, but also because it is the best book I've read this year. The novel begins in Africa, where Bulawayo's protagonist, Darling, is plotting how to steal guavas from a neighbor's backyard trees. She and her gang are in fact close to starving--the setting is never named, but it's not hard to recognize Mugabe-era Zimbabwe--but you wouldn't know it from their banter. They taunt one another with adjectives like "kaka," as in, "I don't care; I'm blazing out of this kaka country myself?" They make fun of each other's clothing, much of it sourced from American NGOs. ("Bastard wears black tracksuit bottoms and a faded orange T-shirt that says Cornell.") Though obviously directing the reader's attention to the precariousness of these children's lives, Bulawayo also captures the exuberance and irrepressible optimism of youth. Darling eventually emigrates to Michigan to live with her aunt, a convalescent-home nurse; and her uncle and overweight, video-game-obsessed cousin. Darling finds Michigan frigid in more ways than one, and readers can't help but yearn--against better judgement--for a return to Zimbabwe. 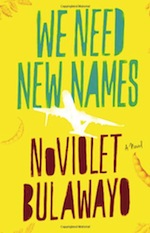 I have stopped being surprised when a first book by a Stegner Fellow reads like the work of a master ten books in. Recent firsts like Z.Z. Packer's Drinking Coffee Elsewhere (2004) and Justin Torres's We the Animals (2011) have gone well beyond announcing the arrival of a new voice; many hit bestseller lists and content for the major book prizes. Bulawayo's We Need New Names carries this remarkable streak forward, making the shortlist for Britain's Booker Prize. I was scheduled to read with NoViolet at a LitQuake event in October, but she had to cancel to attend the Booker ceremony in London. I was really disappointed not to meet her.

Christmas gift season is just around the corner, and I expect that more than a few of my friends and relatives will be getting copies of We Need New Names in their stockings this year. Why not get your shopping done early and go down to Kepler's or Books Inc and buy a copy or two?

Hi Nick,
I haven't finished this novel yet - have been waylaid by The Flamethrowers and Susan Minot's Thirty Girls ? but was excited to see a blog focused on books here and wanted to say so. (I think I met you at Kepler's when trying to decide whether to pursue an MFA at San Jose State in 2010 and your book is on my reading list.) Looking forward to more book-related posts.